So, I left off with me heading out from Skyline Gate realizing that I had not even bothered to grab my drop bag.   I was mildly concerned whether or not I would have enough shot bloks to last the remaining hours of the race.  Being only a half hour ahead of the cutoff, I chose to push on because it was likely that I had enough to get me through.
About a mile or two down the trail, I started to realize that my head was really getting down in the weeds.  I was starting to feel like crap and my focus was poor.  My fingers had begun to swell and were starting to look like red sausages.  I felt like I had mild tunnel vision.  I swung my pack around and pulled two Hammer Electrolyte pills out and downed them with water and Gu2O.  After about 10 minutes, my head cleared up and I felt incredible.  Even my fingers felt a little less swollen.
I starting moving steadily down the single-track trail through the gorgeous redwood forest.  This was some of the best trail running I’ve done to date (not that I’ve done a lot).  The ground was soft with the dirt and needles from the trees and it was gorgeous.  I felt like the guy from the trail running video from movenat.com, effortlessly gliding across the trail, over rocks, down shallow dips, surrounded by redwoods, ferns and creeks.  It was truly my favorite part of the course.
For reference, Skyline Gate is roughly the furthest point out on a figure-8 course from the start/finish line.  The beautiful redwood section runs about 6 miles as it winds its way back towards Big Bear aid station through and across many intersecting trails.  The race officials had really taken care to mark the course well considering the many trails that seem to crisscross the parks in the area.  Yellow ribbons were present to reassure you that you were on course.  At every possible trail intersection there were white chalk arrows for the correct trail and a line with the word “NO” across the front of the wrong path.  They also had race officials seemingly in the middle of nowhere to point out the correct course at certain junctions. 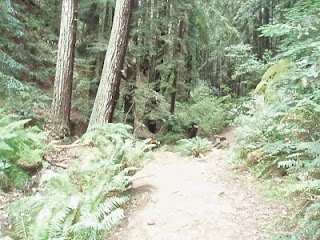 When we reached this bridge just under 2 miles from the finish, I was worried.  On my biking trip, I had scouted this bridge.  The metal steps on the far side have oval holes with vicious looking teeth.  The bridge, or more precisely the staircase, was the main reason I was carrying my huaraches.  I told Joan I didn’t want to lose time getting my sandals out when we were so close to the finish.  So, I braced my arms on the handrails and stepped down lightly and evenly on the step.  It worked!  I maneuvered my way step by step, putting most of my weight on my arms while balancing myself with my feet.  I gained the top of the stairs with lots of stares from the numerous hikers and bikers at the top.
I had done it!  I had reached the final stretch.  Joan and I continued to run reaching the paved path that would take us to the finish.  There were a few steep switchbacks, which we walked and then resumed running as soon as we reached the top.   With less than a half mile to go, Joan’s knee started bothering her.  She told me to go on ahead.
As I rounded a small peninsula on the lake I could see the marina.  The excitement really started to build inside me.
“Keep running.” I told myself. “Less than a quarter mile to go!”
As I approached the picnic areas, I saw orange fencing material.
“That’s the chute!“  I thought to myself.
I sped up.  When I reached the fencing, I realized it was only there to keep people off the bank of the lake.
Damn.
Upon passing the misleading fencing material I saw two signs pointing to the right.  I looked and saw the final bridge crossing.  I heard a cowbell ringing!  They were calling me in!!!
As I crossed the bridge I saw my family standing at the finish line.  My wife and my mom had their cell phone cameras up snapping pictures.  Amazingly, I started sprinting for the finish.  Thirty-one plus miles and here I was sprinting.
I crossed the finish line and walked about ten feet past it.  I bent down and put my hands on my knees and exhaled a deep breath and stood back up.

I had just run 31.65 miles!  I couldn’t believe it.  I had completed my first ultramarathon and I’d done it barefoot!
Official time:  7:23:55
Post-race update:
I hobbled around my house for about 2 days.  Unfortunately for me my house has stairs.  It was quite a feat to maneuver up and down the stairs the first day or two.  My feet did remain somewhat swollen and tender for about 4 days.  I had pictures of the wasp stings, but they did not come out too clear.  However, nearly 2 weeks have passed since the race and I still have itchy traces of the bites.

I have to say that I really appreciated all of the runners and volunteers at the Skyline 50K.  They were all very positive and supportive of me running barefoot.  I did not get one ill comment the entire day.  Most people were excited to see me and cheered me on.  It really made the day all the more memorable.
I’m truly amazed that I finished a 50K ultramarathon.  Five years ago I would have never guessed that I would be at this point.  In fact, if you had asked me if I’d run an ultra, I’d have told you that you were crazy.
Next stop 50 miles!

Terry Orsi
Northern California
I'm a barefoot runner. I've been running barefoot since January 2010. I ran my first barefoot race in May 2010 (5K). Since then I have run a a barefoot 10K trail run and two barefoot half marathons. I finished my first barefoot ultramarathon, the Skyline 50K, in August 2011. I completed the American River 50-mile Endurance Run in April 2013 mostly barefoot. My longest run to date was 100K at the New Year's One Day race in San Francisco on New Year's Eve 2017-2018.